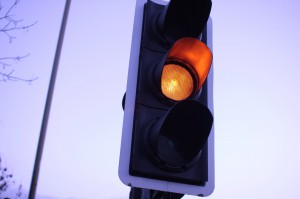 Lots of drivers complain that yellow traffic lights are too short, but did you know that the length of yellow lights varies by city and state? And if the timing of a yellow light isn't set correctly, the likelihood of an accident increases as well.

Drivers in some cities feel that their cities have reduced the length of yellow light times to collect more revenue for red light tickets. Meanwhile, researchers are studying drivers’ behaviors as they approach yellow lights to determine signal times that are safer and more efficient.

The Danger of the "Dilemma Zone"

The decision to stop or go at a yellow light is often an easy one. But when drivers decide to stop abruptly instead of proceeding, rear-end crashes can occur. And when drivers aggressively proceed instead of stopping, collisions with side street traffic can occur.

“The dilemma zone occurs when the driver has no feasible choice,” explains Hesham Rakha, a professor of civil and environmental engineering at Virginia Tech. “In other words the driver can neither stop nor proceed through the intersection before the light turns red. This can also occur if the approaching vehicle is traveling faster than the posted speed limit and/or if the driver’s perception and reaction time is longer than the designed one-second value.”

Rakha and his research team devised a procedure to study the yellow and change interval duration that puts drivers at risk of being caught in the "dilemma zone." This procedure involved creating tables for vehicles traveling at different speeds, in different weather conditions, and across different age groups.

The yellow time is most often set at 4.2 seconds on 45 mph roads in America. This length of time is based on the assumption that it takes one second for a driver to perceive the signal and at least 3 seconds to react to it. Best engineering practices recommend a yellow light of 3.7 seconds, followed by an all-red clearance interval of 0.47 seconds where speed limits are 30mph on city streets.

The Federal Highway Administration's Manual on Uniform Traffic Control Devices recommends that yellow lights fall between 3 and 6 seconds. In Chicago, for example, the yellow light length is just 3 seconds, which has prompted outrage and claims that the city's traffic signals are unsafe and unfair. Anger over red light camera tickets in Florida prompted a reexamination of yellow lights, which also turned out to be timed contrary to well-established engineering formulas. In the end, Florida's Department of Transportation mandated the lights be lengthened.

Most yellow lights in New York City last just 3 seconds as well, an interval that many believe to be a very short window in which to stop. As a comparison, Texas requires a 4.7 second interval on roads with speeds at least 50 mph. Some motorists have actually been successful in getting red light tickets dismissed because of insufficient yellow light requirements.

The safest way to respond to a yellow light is to brake as soon as possible if you are not already in the intersection. Not only is it illegal to run a red light, it's also incredibly dangerous. To avoid T-bone accidents with crossing traffic, treat approaching yellow lights as a signal to come to a full stop as soon as you can.