Railroad Crossings in New York: Sharing the Road with Trains 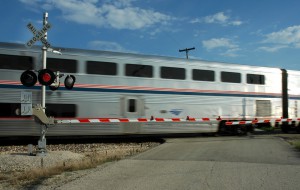 Collisions between cars and commuter trains are almost always deadly and make for some truly devastating news. One such accident took place recently in Valhalla, New York, when a Metro-North commuter train collided with a SUV that was driven by a 49-year-old mother of three, Ellen Brody.

Facts of the Accident

It was after dark, and traffic was backed up near the train tracks where this particular accident happened. According to a news report, driving in this area can be tricky because drivers who enter or exit the adjacent road must turn and cross the tracks near a wooded area.

“It looks like where she stopped she did not want to go on the tracks but the proximity of the gate to her car, you know, it was dark — maybe she didn’t know she was in front of the gate,” one witness said of Brody's getting out and back into her Mercedes ML350 before the train hit her.

The crash caused a fire that consumed Brody's SUV and the first car of the train. Brody, as well as five men on the train, were killed in the accident, marking the deadliest accident in the 32-year-history of the Metro-North commuter rail.

The Dangers in New York

New York is a state known for both its cargo shipments and its public transportation. These facts translate into an abundance of trains carrying goods and people at all times of day and night. The train in this accident was estimated to have been traveling at about 58 mph at the time of impact, and train speed limits are often 60-70 mph. There are approximately 230 to 250 deaths that result from train-highway collisions in the United States each year.

Although drivers often pay for train collisions with their lives, train passenger deaths are far less common. In the case of the Metro-North commuter train, the National Transportation Safety Board has been investigating the intensity of the fire sparked by Brody's SUV gas tank and the adequacy of commuter train emergency exits.

The U.S. Congress passed a law several years ago requiring all railroads to install technology that uses Wi-Fi and GPS to monitor trains' positions and automatically apply brakes in case of emergency. However, the deadline to install this technology was set at the end of 2015, and it's become clear that most railroads will be unable to meet that quickly-approaching deadline.

So in the meantime, here are a few railroad safety driving tips to keep in mind as you drive through New York and around the country.