Where to Celebrate New Year's Eve in New York 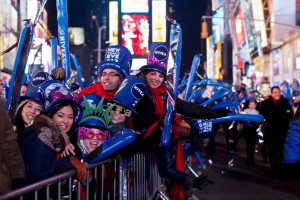 Watch a Show at the Lincoln Center

Since New Year's Eve is a special occasion, many people enjoy watching a concert or other live performance before the clock strikes midnight. The Lincoln Center, a prominent performing arts center on the Upper West Side, has 26 different performance centers and a diverse range of programming. Here you can watch everything from ballet to jazz and classical orchestra music.

Treat Yourself to a Multi-Course Meal

New Year's Eve is a time when it's easy to be indulgent, so why not treat your taste buds to something delicious? Many of the city's restaurants offer special menus for New Year's Eve and feature open bars to celebrate with a cocktail. But remember, if you end up finding yourself at one of those open bar events, designate a sober driver or book a hotel in the area to prevent accidents on the road.

On the completely opposite end of the spectrum, you can also appreciate the coming of the new year by going for a celebration run in Central Park. The New York Road Runners Emerald Nuts Midnight Run happens every year – it begins on 72nd Street near 5th Avenue, and ends with a costume contest. The four-mile run typically draws 4,000 to 5,000 people.

To celebrate New Year's Eve at sea, head to New York Harbor to hop on board one of the city's holiday cruise ships. You can find everything: party cruises, formal attire yacht cruises and family-friendly aquatic outings as well. Get ready for fireworks, dancing, and some amazing food!

No New Year's Eve list would really be complete without at least a brief mention of what'll be going on over in Times Square. Times Square has been the center of New Year's around the world for 109 years. More than anywhere else, this is where anticipation runs high, crowds run huge, and energy bursts into the new year.

If you'd rather stay home to save money or avoid the craziness, you can also watch the official Times Square New Year's Eve 2014 webcast on Livestream.com. Meanwhile, pop some popcorn, open a bottle of champagne, and host a movie marathon night for your family and friends. Not only will staying home on New Year's Eve help keep you and your loved ones safe, it also provides an excellent way to relax and celebrate with the people who matter to you the most.